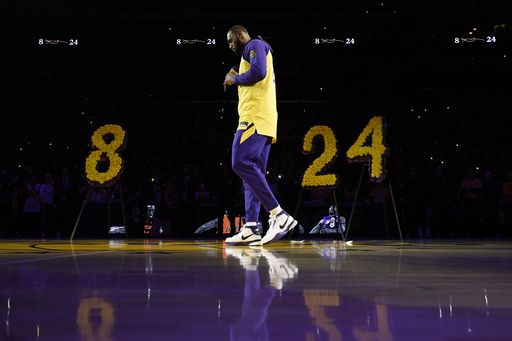 LOS ANGELES (AP) — Kobe Bryant’s resonant voice echoed through the darkened Staples Center while images from his life and career flickered on the scoreboard above.

Lillard scored 48 points and the Trail Blazers beat Los Angeles 127-119 on Friday night in the Lakers’ first game since Bryant, his 13-year-old daughter Gianna and seven others died in a helicopter crash.

Lillard hit seven 3-pointers and added 10 assists and nine rebounds in an inspired effort that sent the Blazers to a win over an opponent still dealing with the trauma of the crash that claimed the life of their franchise icon.

”I think everybody was emotional tonight,” said James, who played in two Olympics alongside Bryant. ”We all have our individual reasons why emotion hits us, and then we all have this brotherhood and this family, being a part of this Laker organization, which automatically brings in even more emotion.”

Both teams stood on the court during a poignant pregame tribute to Bryant including songs, Kobe highlights and James’ speech, which captivated the arena.

Highlights of Bryant’s career played during every break, but Lillard put on a show between the whistles.

Lillard’s seven 3-pointers gave him 40 in his last five games, setting an NBA record. But even the Blazers star knew results were secondary on this unique evening.

”I don’t feel like anybody feels like we walked away as a winner tonight, given the circumstances,” Lillard said. ”The memories that we’ll take away from it was just sad and just tough. It’s good that we had to compete, so being on the winning side is a positive, but I don’t think anybody walks away from this moment and this situation a winner.”

James had 22 points, 10 assists and eight rebounds, and Anthony Davis had 37 points and 15 boards in the Lakers’ first game since last Saturday.

Hassan Whiteside scored 30 points, and C.J. McCollum added 19 for the Blazers, who were playing their third game since Bryant’s death, which seems to have affected practically everyone who picked up a basketball in the past quarter-century.

”We’ve had five days and two games to kind of understand the emotions that were going to be out there,” Portland coach Terry Stotts said. ”I know it was a tough game for the Lakers, watching them during the tribute, during LeBron’s talk. I thought it was a difficult game for them to play. I mean, it was difficult for both teams, but I think we’ve had some time to go through the grieving process.”

The entire evening was likely both profoundly painful and cathartic for anyone who loves the Lakers or Bryant, who won five championships while playing his entire 20-year NBA career in purple and gold.

Bryant retired in 2016, but he remained a face of his only franchise and an inspiration to the current players, who learned about his death on their plane ride home from an East Coast road trip. Their next game against the Clippers was postponed, and the Lakers franchise persevered through a brutal week of coping with the loss.

”We understood this was going to be a difficult one,” Lakers coach Frank Vogel said. ”We didn’t want to lose, but this week has been more about life than basketball. … We’ve got to continue to focus on the work. There’s therapy in the work.”

Several Lakers teared up during the ceremony, as did the Blazers – but after both teams took 24-second and 8-second violations off the opening tip, they lifted the heavy moment with grace.

Davis began the game with red eyes, but managed to score 18 points in the first quarter alone. The Lakers committed 13 turnovers in the first half while playing with an obvious surfeit of energy.

The Lakers then trailed by 12 in the fourth quarter before a ”Kobe! Kobe!” chant broke out. They promptly made a 9-0 run, but the Blazers stayed steadily ahead.

Lakers: Quinn Cook, who idolized Bryant, was visibly affected by the ceremony. He checked into the game in the second quarter wearing his new No. 28 jersey, which represents Gianna (2) and Kobe (8). … Alex Caruso played despite neck soreness.

The ceremony began in a darkened arena with Usher singing ”Amazing Grace.” Staples Center then showed a video of Bryant’s highlights narrated by his own voice.

James then took the microphone, discarded his prepared speech and commanded the crowd with stirring words from the heart. James joined the Lakers in 2018, and he spoke to Bryant several hours before the crash when Kobe congratulated LeBron on moving past him into third place on the NBA’s career scoring list.

Lakers public address announcer Lawrence Tanter then introduced each of the Lakers’ five starters as Kobe Bryant, drawing tears and cheers from the sellout crowd.

The Lakers, the Clippers and the NHL’s Kings all lost their emotionally charged first games at Staples Center after the death of Bryant, who played his final 17 seasons in the downtown arena.

The Finest NBA Video games of 2021