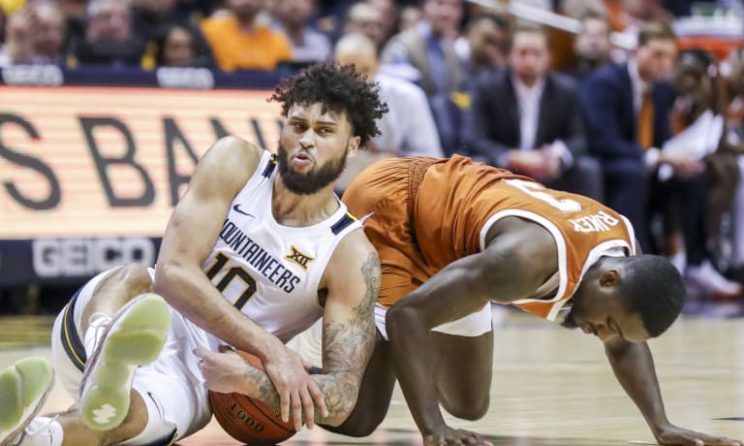 [ad_1]
After what can best be described as a face plant on the road at Kansas State, the questions naturally started swirling about this West Virginia basketball team.

Was it a one game aberration? Had the Wildcats found something that other teams could expose? What happened to the Mountaineers team that had navigated the first 16 games of the season? Was this a sign of things to come? How would this young team respond? And on, and on and on.

It didn’t take long on the short turnaround against Texas to get the answer. Turns out motivating college kids for a 30+ game schedule can be a tricky proposition but there was no question about how ready to play the Mountaineers were going to be at home against the Longhorns after a listless performance.

“I knew we were going to play. I knew we weren’t going to go through the motions like we did out there,” head coach Bob Huggins said.

Turns out he was right and then some. West Virginia put together its most complete game of the season, somehow topping their performance against TCU the game before the road trip to Manhattan. The Mountaineers obliterated a quality Texas team with its trademark suffocating half-court defense, shooting over 50-percent from the floor and for the first time in conference play valuing the basketball.

After averaging 18 turnovers per game in Big 12 Conference play, the Mountaineers had only 8 against Texas and a margin of 24-1 in points off those turnovers over the Longhorns.

“I think they’re finally understanding it we can’t throw it away every other time,” Huggins said.

The Mountaineers held the Longhorns to 36-percent from the floor and 30-percent from three, totals that were inflated in large part due to a 19-point outburst down the stretch with the game already decided. Those totals are much more in line with what the group had done through the first 16 games of the season as opposed to allowing Kansas State to shoot 59-percent and 50-percent from three.

The Mountaineers finished with 97 points, the most that they’ve scored in a Big 12 game that finished in regulation since 2016, and they did it without any single player scoring more than 13. Take into account that the foot was very much off the gas pedal late in the contest and it could have been much worse.

The starting five put together their best performance of the season with three of the five snapping out of prolonged shooting slumps to spark the offense.

Rebounding was decidedly in favor of the home team as well with West Virginia at +28 on the glass, with the Mountaineers finishing almost with as many offensive rebounds (23) as the Longhorns had in total (25). Every loose ball, every effort play was made by the Mountaineers in a complete role reversal.

Never was that more apparent than when freshman Oscar Tshiebwe chased down a loose ball that was heading out of bounds on the opposite end of the floor and then traversed the baseline to finish the play with a highlight reel dunk.

There was a reason for that shift.

“We really felt like we got embarrassed,” sophomore big man Derek Culver said.

And to some degree, they did. It was only one game, but a telling game in the sense that the identity that this team had built in every contest before it was out the window. There was a noticeable lack of effort, particularly on the defensive end against Kansas State and the Wildcats carved them up.

The Mountaineers didn’t just lose to a previously winless team in the league, they got manhandled. That was perhaps the wake-up call this team needed to show that it takes effort every single time out.

“I feel like that wasn’t even our team we didn’t give ourselves a chance. We were eager to play again,” junior forward Gabe Osabuohien, who has scored 19 points over the last two games, said.

Players credited the seniors and team leaders for gathering the group together and making them understand the gravity of their response. It was only one loss, but after the thin thread snapped that held last season together, it was imperative to stop any sort of questions about this team.

Texas certainly isn’t as bad of a basketball team as it looked like at times Monday night and we already know that West Virginia is consistently that good. But for one night, the Mountaineers put it all together and they did at perhaps the most critical time.

Now the question becomes, can an effort remotely like it be captured with any consistency? Regardless the answer that is a quandary that this Mountaineers basketball team would much rather answer.

“I think the sky is the limit with this group. We’re going to be as good as we want to be. If we have games like this, I don’t see anybody beating us but we’ve got to be consistent. We can’t turn on the switch and turn it off when we want to, we have to come out and play like that every single game. It’s really going to be on us to determine how far we’re going to go this year,” senior Jermaine Haley said.

Choose Six: KSO employees predicts some winners in week one